Its objective is to promote employment, highlighting and supporting local initiatives. Private or public, individual or collective, it seeks to create synergies linked to economic activities, land planning and human potentials on which the South Luberon identity is based.

Founded in 1982, it is recognized by prefectural agreement since the 2nd august 2004 : granted for three years, the agreement is based on specifications and an action program elaborated in consultation with the State services.

Representatives of the devolved State services and Local Authorities are systematically associated to the CBE projects. The Board of Directors, composed of 21 members, is divided in 5 Colleges : elected representatives, company managers, trade unions, organizations of Social Economy, associated partners (consultative voice).

The creation and organization of a CBE respond to a common will of local socio-economic actors. This expression of local democracy assure the efficiency and pertinence of the actions conducted. 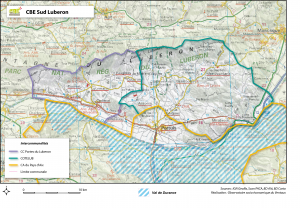 An intervention territory of 30 municipalities for a population of 80 000 inhabitants:

The support of economic actors is divided into 4 axes:

An attractive and well-located territory

The territory is being very attractive for populations and companies: sun belt effect, high environmental and patrimonial quality territory, including equivalent distances from economic attractiveness pole such as Aix-Marseille, Cadarache (CEA-ITER) and Avignon.

In contact with more than 500 project holders each year, and since 2005, a basis of 600 companies on the territory with which strong relations were created. Those companies were supported before their creation by the projects managers of the CBE and are still in activity.

In each sector, the CBE has partners to rely on and collaborate with:

Moreover, The CBE Sud Luberon has experience in community programmes through the Synergie Entreprendre process (ESF fund), the ICS-Med project (FEDER) and the creation of the south European network for Social Economy Medcoop in which it is a founding member.

It is thus recognised on the territory as a territorial development entity competent on european cooperation matters.